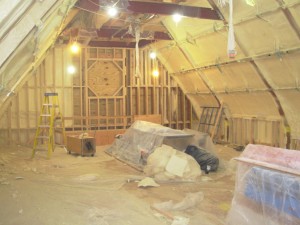 Recently we have been involved in the renovation of a 30 year old pool house structure that needed to be reconstructed with modern mechanical systems and a better insulation system.  The existing insulation system in the building was a fiberglass batt system with little vapor control.  The system led to degradation of the wood structure that was used in combination with a steel framing.  In redesigning the envelope, the building consultant recommended a sprayed polyurethane foam (SPF) insulation system with a vapor barrier on top of the foam to establish a Class I vapor barrier.

Closed-cell foam typically qualifies as a Class II vapor retarder which is sufficient for most residential applications.  In an indoor pool, the indoor humidity levels in the winter far exceed the exterior relative humidity level, setting the stage for a significant vapor drive.  Hence, there was a need to control the potential for vapor to enter into the foam and saturate the material even though it was closed cell foam.

SPF is produced by a chemical reaction of two equal parts of two components A and B, or isocyanate and polyol respectively.  The resulting chemical reaction is polyurethane foam.  The mixing, application and curing of the foam is the key to its success.  The ratio of A to B is 1:1 by volume, but its specific gravity changes with temperature, so each component is heated before being pumped to a mixing gun which the sprayer uses to apply the foam to the building substrate.   Suppliers of the components require that the chemicals reach minimum temperatures before being pumped to the application guns.

The mixture is generally accepted to be on specification if that ratio is within a certain percentage of the design.  Failures in the proper ratio or temperature can cause everything from brittle foam to foam that does not fully react, leaving one component in a liquid state with the potential for off-gassing.  Test shots of the foam on plastic will give a good sense of the finished product, which should be uniform in color and cell structure.  Testing for the right ratio and component temperatures before the applicator sprays the foam is critical to the success of the application.

The surface temperature of the substrate to be sprayed is very important.  If it is too cold, the foam will shrink and pull away from the substrate.  The foam must also be kept at a temperature above a specified minimum (which varies by product) for a specified period as stated by the manufacturer to cure properly.  The foam itself will reach internal temperatures exceeding 250 degrees, and the depths of the lifts are limited to about 2”, which varies with each product.  Deeper foam thicknesses must be done in multiple passes.  Waxy substrates like the exterior protection on laminated veneer lumber may cause a poor bond.  A field test for adhesion is always advisable.

In areas where foam is left exposed and must be covered with a fire protective ignition or thermal barrier, an intumescent paint is usually the first choice of applicators.  There are other products available with fire-retardant additives included in the foam itself which obviate the need for a separate coating.

SPF has unique thermal and air sealing properties which can significantly increase the thermal performance of a building.  Like all critical building components, it requires a reasonably high level of oversight and testing to ensure that the foam is processed, installed, and cured properly.

We would like to thank Henri Fennell of Henri Fennell Consulting and Kohta Oeno of Building Science Corporation for their invaluable knowledge and patient assistance.

Get In Touch With Us